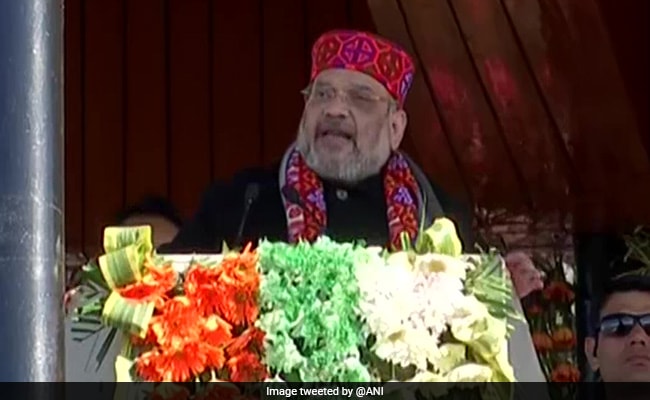 Home Minister Amit Shah, in his latest comments attacking the Congress and former prime minister Manmohan Singh, remarked that earlier, “Aalia-Malia-Jamalia” used to come from Pakistan every day and “kill Indian jawans”, but the BJP put a stop to this. Prime Minister Narendra Modi’s government taught Pakistan a lesson by striking on its territory, he said.

“They had left the border open. When Narendra Modi came to power, Pakistan thought things would continue like this. They didn’t realise that this is no Congress government…this is the BJP government. Mauni baba (silent) Manmohan Singh was not PM anymore, Narendra Modi, of the 56-inch chest, had become Prime Minister. They made blunders by attacking Uri, Pulwama. But the Modi government showed them, by carrying out the surgical strike, air strike. We entered their home and attacked terrorists operating there,” the Home Minister said.

Mr Shah has used the phrase “Aalia-Malia-Jamalia” for Pakistanis several times in the past, for example while campaigning in Uttar Pradesh and in Gujarat.

In the middle of protests over the citizenship law CAA, the National Population Register (NPR) and the National Register of Citizens (NRC) – which activists and opposition parties fear will be used as tools to target Muslims – Mr Shah put out a clarification and also threw a challenge at Congress leader Rahul Gandhi.

“No one will be stripped of their citizenship. The Congress and company are spreading rumours that the citizenship of the minorities will be taken away with the Citizenship Amendment Act,” he said.

“I challenge Rahul ‘baba’ to show even one clause in the Act that has provision to take away citizenship of anyone,” he added.

Under the Act there was no provision to take away the citizenship of anyone, even belonging to a minority community, said the Home Minister.

The CAA or Citizenship (Amendment) Act is the first-ever law to make religion a criteria for citizenship. The government says the law will help non-Muslim migrants from three neighbouring nations become Indian citizens if they fled religious persecution and entered India before 2015. Activists, students, opposition parties and other protesters say the law discriminates against Muslims and is against the secular tenets of the constitution.

The NPR, sanctioned by the government earlier this week, is seen by critics to be a precursor to the NRC, an exercise to identify illegal migrants. Protests against the NPR and NRC revolve around concerns that along with the new citizenship law, they will be used as tools to target Muslims.