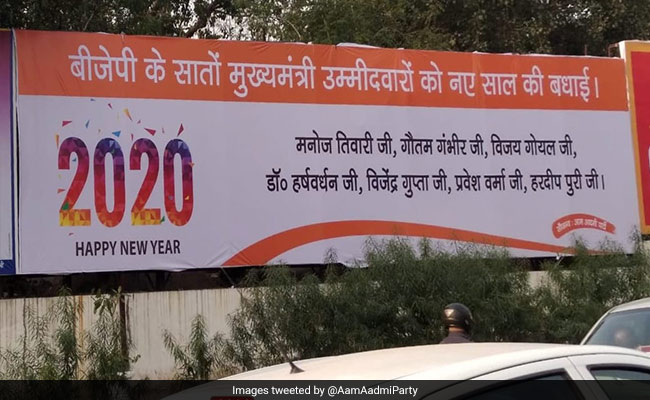 Arvind Kejriwal’s Aam Aadmi Party has begun this year as it finished the last – by taking a swipe at the BJP on Twitter. In a tweet posted this evening the AAP wished “7 Chief Minister candidates of Delhi BJP” a happy new year – a pointed reference to ongoing uncertainty over who will be the BJP’s chief ministerial candidate in elections scheduled for later this year, asking, “but the question is who will compete against Arvind Kejriwal?” The tweet is accompanied by a large banner that identifies Manoj Tiwari, Gautam Gambhir, Vijay Goel, Hardeep Singh Puri, Harsh Vardhan, Vijender Gupta and Parvesh Sahib Singh as the seven “candidates”.

Union Minister and senior BJP leader Prakash Javadekar said yesterday that nothing had been decided about the party’s chief ministerial candidate for forthcoming Assembly elections in Delhi. Mr Javadekar, who is the party’s in-charge for the election, said the party would take decisions as per strategy.

On November 24 Union Minister Hardeep Puri, one of the BJP leaders in AAP’s tweet, appeared to suggest that Delhi BJP chief Manoj Tiwari would be the party’s chief ministerial candidate.

Mr Puri and the AAP had also sparred, last week, over the centre’s bill to regularise nearly 2,000 unauthorised residential colonies in the national capital. The AAP and Prakash Javadekar also exchanged tweets, with the ruling party in Delhi responding with a witty reply to the Union Minister’s “You can’t fool all the people all the time” barb.

Manoj Tiwari, who is the Lok Sabha MP from the Delhi (North East) constituency, led the BJP to victory in all seven of Delhi’s Lok Sabha seats.

Vijender Gupta is the sitting MLA for Delhi’s Rohini constituency and is also a member of the BJP National Executive. In the last Delhi election, which the AAP swept by winning 67 of 70 seats, he was one of three BJP candidates to win.

The seventh “candidate” – Vijay Goel – is a Rajya Sabha MP who was a Union Minister in the NDA government under former Prime Minister Atal Bihari Vajpayee and in the first Narendra Modi administration.

Chief Minister Arvind Kejriwal and the AAP are seeking re-election after recording a massive win in 2015; the party won 67 of 70 seats in the Assembly. The party launched its campaign last week, with Deputy Chief Minister Manish Sisodia saying he was confident of success. The party also revealed its slogan – ‘Ache beete 5 saal, lage raho Kejriwal (Past five years have been good, keep going with Kejriwal’).

The BJP also launched its campaign last month, with Prime Minister Narendra Modi leading a rally at the city’s Ram Laila Maidan. The Prime Minister used the occasion to target opposition parties, and especially the Congress, over nationwide protests against the citizenship law.

Rahu in sixth and Ketu in twelfth house of birth chart