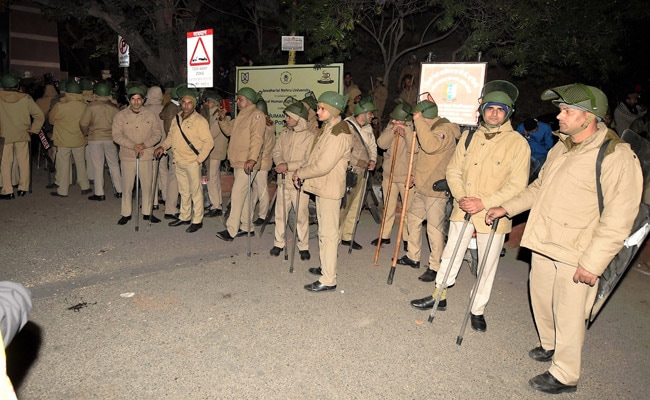 Police conducted flag marches inside the JNU campus in Delhi.

Sunday’s violence at Delhi’s premier Jawaharlal Nehru University (JNU) received widespread condemnation, including from the city police force’s lawyer who spoke out strongly against the attack on students and faculty by a group of masked assailants.

I, as Standing Counsel @DelhiPolice, hang my head in shame after witnessing video clips of goons merrily entering JNU campus, creating mayhem &grievously injuring innocent students, damaging public property and then exiting the campus in capital city. Where is our force @CPDelhi?

In case there is still any doubt &one needs to find out as to who exactly has been the aggressor &who the victim at #JNU then all that needs to done is to take stock of who really sustained injuries? Those who belong to ABVP or the Left backed student group? #दूधकादूधपानीकापानी

Violence broke out at JNU on Sunday night as masked men and women armed with sticks and rods attacked students and teachers and damaged property on the campus, prompting the administration to call in police which conducted a flag march.

Around 40 people, including JNU Students’ Union president Aishe Ghosh, were injured amid chaos on the campus for nearly two hours.

Witnesses alleged the attackers entered the premises when a meeting was being held by JNU Teachers’ Association on the issue of violence on campus and assaulted students and professors. They also barged into three hostels. Video footage showed a group of men, who were brandishing hockey sticks and rods, moving around a building, attacking students including women.

The Left-controlled JNU Students’ Union and the Akhil Bharatiya Vidyarthi Parishad (ABVP), the student body linked to the ruling BJP, blamed each other for the incident.

The JNU administration said late in the night that students opposing the semester registration process “moved aggressively” in a bid to stop those supporting the process, triggering a clash, while “masked miscreants” carrying sticks and rods went on a rampage in hostel rooms.

Home Minister Amit Shah spoke to Delhi Police chief Amulya Patnaik and the ministry has sought a report from him.