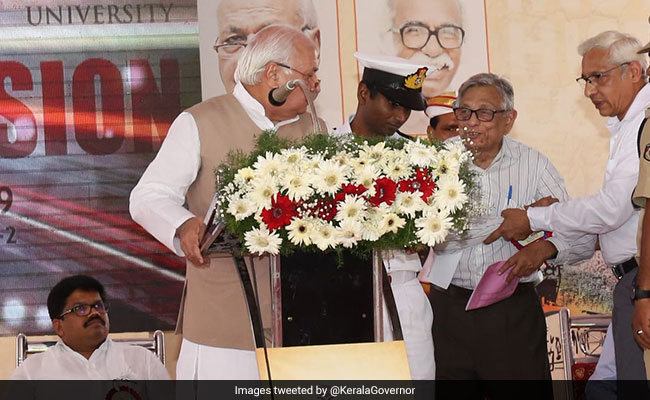 Kerala Governor Arif Mohammad Khan’s speech, in which he supported the Citizenship Amendment Act (CAA) at the Indian History Congress at Kannur on Saturday, kicked up a massive row at the event, with several delegates launching a spontaneous protest. The delegates claimed Mr Khan was quoting iconic leaders out of context in what they called a political speech. “You have come with an agenda…you cannot shout me down,” he shot back, accusing the protesters of intolerance. In response, a delegate is heard shouting in a video that Mr Khan had an agenda and, “India is not Pakistan”.

Undeterred with the protest, the Governor went on with his speech. “…Maulana Azad had said that partition has swept away dirt. But some potholes (ghadde) are left back, and it’s stinking due to water accumulating in it,” he said.

“Stink is coming from you”, a visibly upset delegate retorted.

“Maulana Azad sahab had said this for you all,” Mr Khan said.

Mr Khan later tweeted and said noted historian Irfan Habib, who was on the stage at time, “disrupted” his speech and shouted that “he should quote Godse” instead of Maulana Azad, a pre-Indpendence Congress leader.

“Inaugural meet of Indian History Congress does not raise controversies. But at 80th session at Kannur University, Shri Irfan Habib raised some points on CAA. But, when Hon’ble Governor addressed these points, Sh.Habib rose from seat to physically stop him, as clear from video,” a tweet from his official account read.

Inaugural meet of Indian History Congress does not raise controversies. But at 80th session at Kannur university, Shri Irfan Habib raised some points on CAA. But, when Hon’ble Governor addressed these points, Sh.Habib rose from seat to physically stop him, as clear from video pic.twitter.com/mZrlUTpONn

“Hon’ble Governor said that he had responded to points raised by previous speakers, as a person duty bound to defend and protect the Constitution. But trying to disrupt speech from stage and audience due to intolerance towards different opinion is undemocratic,” he added.

A source close to Mr Habib told NDTV that the event was Indian History Congress not a seminar on CAA.

The police were also seen taking away a woman delegate who was protesting against the Governor’s speech. Other delegates surrounded her, not allowing the police to take her away.

“Irfan Habib was pushed, as he was speaking to the secretary, asking for the Governor to finish his speech, since it was already a long one,” the source said.

CPM MP KK Ragesh was also present at the event when the incident took place. “Governor was speaking on partisan politics, not as someone who holds a constitutional post. He in fact started his speech addressing it to me, saying ‘Mr MP this is for you’… Irfan Habib was perhaps loud but did not push anyone,” he said.