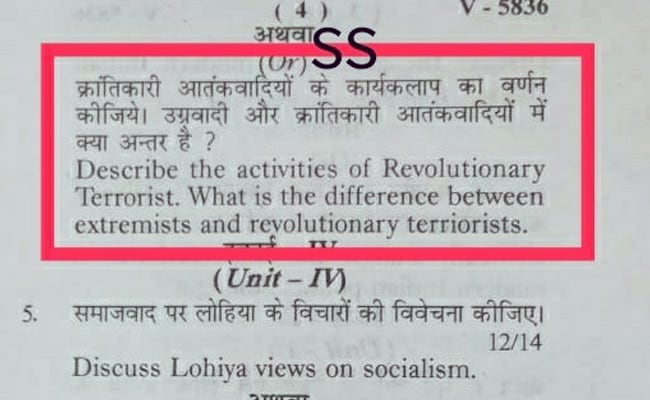 The BJP has sought strict action against the academics responsible.

The use of the term “revolutionary terrorists” in a question paper set at a college affiliated to Jiwaji University has sparked an uproar in Madhya Pradesh, with students as well as opposition BJP leaders terming it as an insult to the country’s freedom fighters.

Taken aback, students submitted a memorandum asking university authorities to remove the question from the examination paper. Subsequently, the university administration set up a committee to the probe the matter on Friday.

“Revolutionaries who sacrificed their lives for our country should be given the status of bravehearts. Instead, they are being called terrorists. We condemn this and want the question withdrawn,” news agency ANI quoted a student as saying.

Former Chief Minister Shivraj Singh Chouhan said he was deeply hurt by the incident. “How can anyone call them terrorists? Because of their sacrifices, we are able to breathe freely. I demand that the Madhya Pradesh government take strict action against such irresponsible people,” he added.

His cabinet colleague, PC Sharma, adopted a more moderate tone. “We are yet to figure out what sense the question was written in. The students have given a memorandum to the principal, and we will know more about it soon,” he said.

College principal VK Tiwari told ANI that the students’ objection will be conveyed to the university vice-chancellor.