A plan to set up an ’empowered wildlife advisory committee’ in Madhya Pradesh has been caught up in the conservation versus tourism debate and is facing stiff resistance from the state’s forest department. A proposal to create such a body was recently sent to the state government by Delhi-based conservationist Valmik Thapar (who was also recently appointed to the state’s wildlife advisory board). The proposal has been rejected by the state’s chief wildlife warden, U. Prakasham, who says that such a committee is not needed. A section of conservationists had also opposed the proposal-they argue that such a committee would favour tourism over conservation.

Tourism has emerged as a major focus for the Kamal Nath-led state government, which hopes the sector can provide substantial employment and revenue. In his proposal, Thapar wrote that he was suggesting such a committee-aimed at restructuring wildlife policies governing the use of forest areas-after a discussion with the chief minister, and that he would be willing to accept an assignment as vice-chairperson of the said committee. Former chief minister Digvijaya Singh has been suggested for the post of chairperson, with other members drawn from the ranks of tourism experts, forest department officials (including the chief wildlife warden) and eminent wildlife scientists, such as Raghu Chundawat. The committee was to submit its first report in October.

The committee, which would report directly to the CM, would oversee all issues relating to wildlife protection. It would also be responsible for creating tourism initiatives inside protected areas, targeting annual revenues of Rs 100 crore, as well as the implementation of models that engage local communities living in buffer areas surrounding tiger reserves, targeting annual revenues of Rs 2,000 crore. The committee’s other responsibilities would include developing measures to reduce man-animal conflict and encouraging public-private partnerships for wildlife initiatives. 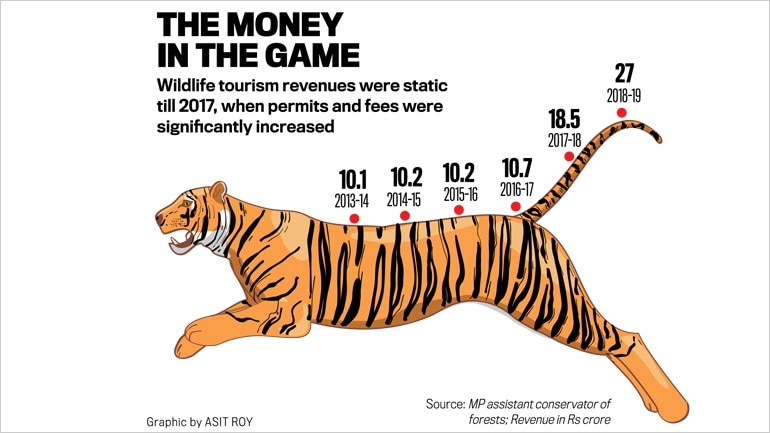 When this plan was forwarded by the chief minister’s office to the forest department for comments, it ran into immediate resistance. Sources say the chief wildlife warden believes this committee to be unnecessary for several reasons, including the fact that there are already two statutory bodies-the state wildlife board and the tiger steering committee-both established under the Wildlife Protection Act, 1972 and both chaired by the chief minister, that look into these and other issues. The forest department’s note on the proposal elaborates on these points-for instance, highlighting the fact that Thapar is already a member of the state wildlife board and could offer suggestions at that forum, and that subject matter experts could easily be nominated to the tiger steering committee. It also notes that the state already has an ecotourism development board, which regularly implements tourism initiatives. “There are already other committees that have the same mandate,” says Prakasham. “Moreover, there is no provision in the Wildlife Protection Act, 1972, for setting up such a committee.”

The primary reason for the opposition, according to sources, was the department’s resistance to a tourism-centric policy for wildlife conservation, even though the chief wildlife warden’s note on the proposal does not highlight tourism as the main grounds for opposition. This is somewhat understandable, given the chief minister’s focus on the sector.

Defending the proposal, Thapar told india today: “Other states have standing committees on wildlife because the [state] wildlife advisory boards do not meet very often,” adding, “[the proposal to set up such a committee] was not my suggestion-it came from the state government.” He also noted that Rajasthan had a similar committee up till 2019.

When asked about the committee, ex-chief minister Digvijaya Singh invoked a ‘middle path’ approach vis-à-vis tourism and conservation. “I feel that Madhya Pradesh should not do what Rajasthan did in promoting wildlife tourism at the cost of conservation, but at the same time, it’s not that the state should not [be allowed] to capitalise on its heritage,” he said.

The note of dissent from the state chief wildlife warden’s office is currently being examined by forest minister Umang Singhar. However, problems loom: Singhar and former chief minister Singh have, at best, a rocky equation. Singhar recently accused Singh of trying to influence state policy, with the acrimony rising to the point that chief minister Nath had to ask him to restrain himself and not speak to the media. Given this strained background, it is unlikely that the forest minister would have a positive view on a committee proposed to be headed by the former chief minister.

Resistance to the committee notwithstanding, the state has much to cheer about when it comes to tigers. In the recently announced wildlife census, Madhya Pradesh reclaimed its ‘home of the tiger’ tag, which it had lost to Karnataka in 2011. With 526 tigers, the state currently has the highest number of tigers in the country. It is also home to some of the best managed and best known national parks, including Kanha, Pench and Bandhavgarh, which attract tourists from all over the world.

Madhya Pradesh has a total forest cover of about 90,000 sq. km, of which a little more than 10,000 sq. km (about 12 per cent) has been set aside for sanctuaries and national parks (there are 11 national parks and 24 sanctuaries in the state). Of these, the bulk of tourist footfall is at the six tiger reserves, namely Kanha, Bandhavgarh, Pench, Satpura, Panna and Sanjay. In 2018-19, about 1.9 million tourists visited the state’s wildlife areas, generating about Rs 27 crore of revenue. These revenue numbers had remained largely static in the recent past until a substantial hike in entry fees was implemented in 2017. However, underlining the conservation concerns was a Supreme Court intervention in 2012, which led to the decision that areas open for tourism in tiger reserves should not exceed 20 per cent of the reserve’s core areas.

“The national wildlife action plan of 1983 is the only policy guideline [to be] followed on the subject of wildlife tourism,” says former principal chief conservator of forests and member of the state wildlife advisory board Suhas Kumar. “It states that tourism can be used to elicit the support of the local community, but conservation cannot be treated as a source of income. In case of conflict between conservation and tourism, the former will prevail.” He adds: “It is not legally tenable, and in fact laughable, that a committee is proposed to be set up that will override Supreme Court guidelines on tourism in tiger reserves.”

While forest department officials do not have a favourable view of tourism, there are others who differ. “In the 2014 wildlife census, in Madhya Pradesh alone, 79,000 sq. km of forests were surveyed for tigers. [They were found to inhabit] 15,000 sq. km of area. Of these areas, only 4,000-5,000 sq. km of tiger territory was in protected areas, while the rest was outside. To protect these tigers, the forest department only wants to create more protected areas-but who will protect wildlife in these areas?” asks wildlife scientist Chundawat. He adds that the current policy of conservation, based on exclusive control by the forest department, needs to change. “A country like Scotland, with no big cats, earns 4.6 billion pounds a year from tourism-we don’t even get a fraction of that.”

Chundawat says the forest department vilifies those who have differing views on conservation. “Tourism has to be within the conservation framework,” he says. “Right now, there is no difference between tourism at the Taj Mahal and at wildlife reserves, which is the root of the problem.” He also supports Thapar’s candidacy. “He was behind the decision not to include forest staff in election duty,” says Chundawat, adding that those outside the department have an interest in conservation too.

Get real-time alerts and all the news on your phone with the all-new India Today app. Download from