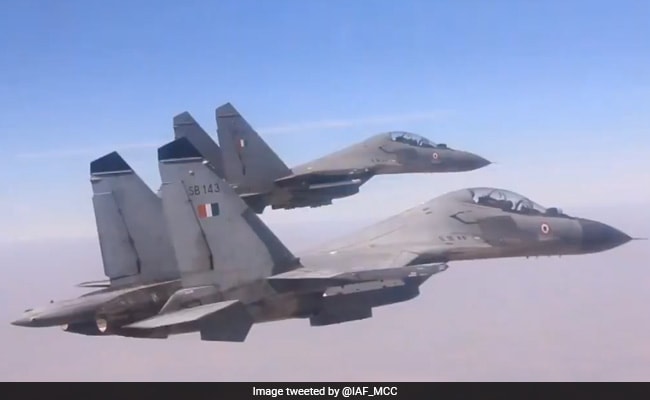 Summing up an average day in the life of a soldier, the Air Force has tweeted a video paying tribute to men and women in uniform where Sukhoi-30s and Rafale jets are seen taking to skies. Among the myriad challenges faced by the security, braving tough weather conditions and defying the enemy are just some of them, the video shows as the Air Force sends across wishes for New Year.

“Love for the nation turns fears into passion and enthusiasm to defeat enemies,” the narrator explains in nearly two-minute long clip, as visuals play out taking a closer look at a typical day in the life of a soldier.

“Storms are diminished when I fight for the nation because I am a soldier of Indian Air Force. I keep an eye on the enemy from the skies,” the narrator says, adding that a soldier has a falcon’s eye, a lion’s heart and strength like that of the mighty Himalayas.

Soldiers are seen training in tough terrains, flying fighter jets in the clip that sums up how they embody the five elements – Earth, Water, Fire, Air and Ether.

“Vayu Sena ka jawan aadi hai, anth nahi hai (An Indian Air Force soldier is the beginning, not the end),” the narrator concludes, asserting that “defeating death is a habit for them”.

“Indian Air Force wishes all a very Happy New Year 2020,” reads the Air Force’s tweet. The video tweeted last night has been liked by over 4,000 times.

What is Rahu in Vedic Astrology ?