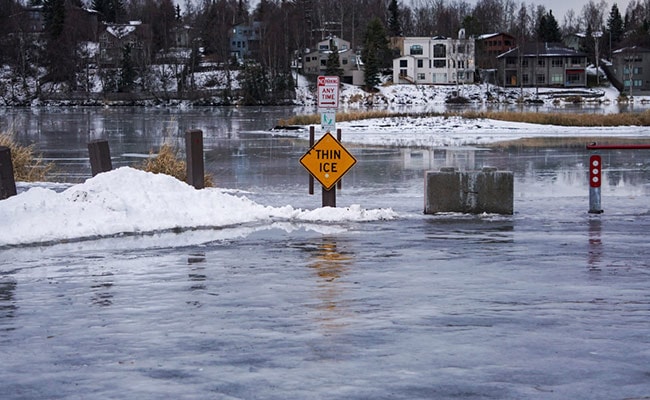 Alaska is warming faster than any other state in the country.

Bettles, Alaska hasn’t climbed above 0 degrees in nearly 10 days. Sunday’s high temperature was minus-47. And at minus-56 degrees this morning, the quiet community of roughly a dozen year-round residents set a daily record low. The frigid temperature rivaled the average winter temperatures found on the surface of Mars.

Bettles is not alone. Much of Alaska’s interior and far north are enduring lows of 35 to 55 degrees below zero. During the daytime, it doesn’t get much better. Highs of around minus-40 are pretty common.

Fairbanks, meanwhile, was forecast to “warm” into the minus-20s on Friday, with a chance of snow flurries and freezing fog.

The cold is courtesy of an encroaching, strong dome of high pressure banked to the west of Alaska, while a series of lows looms to the east. The flow of air between these two weather systems has allowed a persistent tongue of cold to sweep down from the Arctic, lapping at the frigid tundra. Clear skies induced by high pressure has permitted radiational cooling, plummeting temperatures even more.

Elsewhere in Alaska, Kotzebue started their day at minus-15, Anaktuvuk Pass at minus-27, and even Utqiagvik – the United States’ northermost community – ended their workweek at a brisk minus-11.

Temperatures will finally start to moderate some into the weekend, recovering towards more seasonable norms to ring in the new year. However, there are indications the pattern thereafter will favor renewed shots of Arctic air.

The cold of this magnitude is not that unusual for Alaska, although it’s actually becoming more rare as the climate warms. Bettles, for instance, averages eleven nights a year that drop below minus-40.

However, in 1950, Bettles averaged closer to 20 nights a year with minus-40 degree lows.

It’s not an isolated trend. Across Alaska, the frequency of ultra-cold nights has been dwindling in recent years. In most places, they’re about a third less common. Alaska is warming faster than any other state in the country. Climate Central, a nonprofit climate research and journalism organization, estimates the nation’s largest state has spiked by more than 4 degrees just since 1970, rapidly melting ice and redefining life for Alaska residents.

Thus far, it appears the only temperature records set or tied were in Bettles. Other weather stations may technically have set record values, but long-running weather and climate observations are only available at 20 different sites across the state.

Allakaket did hit minus-60 this morning, the state’s coldest observed temperature during this Arctic outbreak. And yet it still didn’t even claim a local daily record, the village northwest of Fairbanks had dropped to minus-67 degrees on December 27, 1954.

Alaskans also are dealing with ice fog. In the Lower 48, there’s freezing fog, which occurs when supercooled water droplets remain in the air at temperatures below freezing. These droplets freeze upon contact with objects – depositing an icy glaze on any untreated surface or vegetation. It’s a sneaky way to ice over the landscape.

Ice fog, however, is even more extreme.

“It only forms at 35 degrees below or lower,” explained Alex Young, a meteorologist at the National Weather Service in Fairbanks. “All the particulates are actually frozen.”

Because the air can hold so little moisture, any additional moisture at temperatures near minus-50 immediately results in ice fog.

The ice fog is most common near population centers. That’s because it’s so dry up there that most of the moisture in the air comes from human activity – automobiles, generators, or even breathing. At temperatures this frigid, that moisture freezes and lingers. A walk to the mailbox could technically deposit a floating ice cloud behind you. It’s a big problem with vehicle exhaust on roadways.

That traps all that ice fog in the lower atmosphere, hugging the ground.

A number of weather models are indicating a dramatic warmup could be in store for some as the cold attempts to relent around New Year’s Eve. With temperatures making a run towards zero, it’s absurd to think that a 40 or 50 degree leap is possible in some locales ― but the temperatures still won’t be in positive territory.

However, it’s unlikely that a warmup will be sustained, based on the larger-scale weather pattern.

It’s important to remember that a flurry of record lows doesn’t outweigh an avalanche of accumulated record highs. In Alaska and more broadly, temperature records are skewed toward warm extremes, rather than remaining in a roughly 1 to 1 balance that would be expected if the climate were not warming due to human activities.

Take Bettles, for instance: They’ll still wind up with their second-warmest year on record.

According to Brettschneider, 326 record highs were set at major climate stations in Alaska during 2019. Only 11 such record lows were set during the same period.

At Talk On Citizenship Hosted By Government, Only These Actors Showed Up